Publicis Groupe Publicis Groupe: In Q3 2020, advertisers spent 2.5% less than a year ago and the entire year will end with a decrease of 8.6% 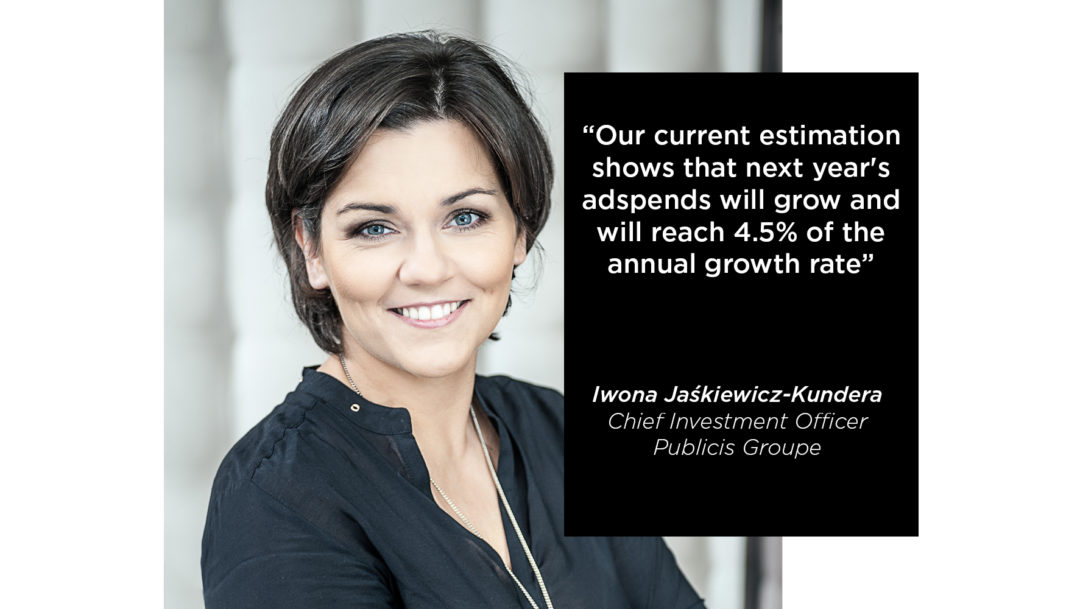 The net value of the advertising market in Poland after three quarters of 2020 amounted to nearly PLN 6.1 billion, which means a decrease by 11.7% compared to the same period of 2019. – The value of the market is based on the latest report “Advertising and Media Market”, created by Publicis Groupe Polska analysts.

After three quarters of 2020, the advertising market in Poland decreased in value by 11.7% compared to the previous year. Thirteen sectors reduced their advertising investments and only three intensified. Advertising spending increased in the largest sector, i.e. retail – by 2.5% and in the two smallest sectors: computers and audio/video (+12.5%) and home products (+14.4%). The largest volume decreases were generated by three sectors: finance, food and automotive. In the financial sector, advertising expenses were very much limited by loan institutions such as Vivus, Provident or Creamfinance. Among banks, the greatest reduction was observed in Credit Agricole, PKO BP or BNP Paribas. Decreases in the food sector were mainly caused by budget reductions in categories such as: chocolate and chocolate products; cakes, pastries, bars, ice cream and snacks. As far as advertisers are concerned, Ferrero, Unilever, Wawel Krakow, Wedel spent much less than a year ago. In the automotive industry, the advertising expenses were the most limited by the brands of passenger cars, among others: Volkswagen, Skoda, Toyota, Opel. In the category of petrol stations, we observed an increase, thanks to the large expenses of PKN Orlen and Lotos Group.

After nine months of 2020, all media except for the Internet recorded declines. Online advertising generated higher inflows from advertising, by 2.5%. Television and radio lost 15.5% and 11.8% respectively, while dailies and magazines lost 30.3% and 37.5%. Cinemas recorded the strongest negative growth – advertising spending was 70.1% lower than in the previous year as a result of the government’s decision to temporarily suspend cinema operations from March 12. The cinemas opened in early July, but turnout was far from what we saw in previous years. Considering the volume, Internet budgets increased by PLN 63.4 million. The total reduction of expenses in the legacy media was PLN 863.6 million.  Television lost most of its volume – the collapse of the market in Q2 resulted in the total revenues of TV stations after nine months being lower by as much as PLN 475.2 million compared to the previous year.

The value of expenditure on online advertising (not including advertisements) increased in the period from January to September by 2.5%, giving the result of PLN 2.6 billion , i.e. PLN 63.4 million more than last year. In Q2 of this year, for the first time in its history, the Internet recorded a decrease in advertising investments (-6.9% after data revision), however, Q3 is a return to the increase in spending. The pandemic contributed to strengthening the Internet’s position in the advertising market and accelerated the flow of spending from other media. Some of the budgets not used in press, cinema and outdoor advertising were transferred to digital.

The value of TV budgets decreased by PLN 475.2 million or 15.5% after nine months of 2020 compared to the first three months of 2019. In Q3, the situation was completely opposite to what happened in Q2. Since July, the economic situation in Poland started to stabilize and advertisers’ spending began to return to 2019 levels. The problem for the market was poor viewership. In Q3, the ATV index fell by as much as 7.3% and the average viewership was 2 hours and 44 minutes per day. Such a large decrease translated into a 5.8% decrease in available resources (EqGRP16-49). TOP4 channels really lost a lot. Despite the good filling of advertising breakdowns, four mainly channels in total generated as much as 21% less ratings than in the previous year (spots).

After nine months of 2020, radio budgets amounted to PLN 446.6m, down 11.8% on the same period last year. In Q2, radio was heavily affected by the pandemic (-32.2% after data revision). Advertising expenses were reduced by over 40% in April and May. In Q3, the market stabilized – the value of budgets fell by only 2.5%.

After nine months of 2020, advertising revenues of outdoor operators fell by 38.4% or PLN 146.7 million. The second quarter was the biggest crisis in OOH’s history of successful monitoring. More than 2/3 of budgets disappeared from the market. Q3 brought a slight improvement, but neither traffic in cities nor advertising budgets returned to the previous year’s level. For example, the Warsaw ZTM reported that in September this year the number of passengers accounted for about 62% of the pre-pandemic travelers.

After nine months, the size of budgets allocated in newspapers and magazines decreased by 30.3% and 37.5% respectively. Q2 alone was even worse for printed media. The decreases were 43.8% and 56.6% respectively.  Summer and autumn were not much better for the press, which does not allow to look optimistically into the future. The pandemic accelerated the trend of the outflow of advertising budgets from the press to the Internet.

As of March 12 this year, the cinemas stopped generating revenues due to the government’s decision to temporarily suspend cultural institutions. The cinemas operating under the new rules could be reopened on June 6. All the cinema chains decided to open their cinemas at a later date. Only several Multikino cinemas opened on June 19. Helios opened at the beginning of July, while Multikino and Cinema City cinemas all over Poland did not open until 22 July. The cinemas were closed again on November 4. Initially they were to be opened from the beginning of December, but it is already known that they will remain closed until the end of the year.

As a consequence of different dynamics of changes in particular media classes, their market share is changing. After three quarters only the value of investments in online advertising increased. That is why the Internet has increased its share in the media mix. In Q2 alone, for the first time in history, Internet spending exceeded spending on television. In the entire analyzed period, the percentage of budgets allocated to online advertising increased by as much as 5.8 percentage points from 36.4% to 42.2%. The share of radio advertising remained unchanged at 7.4%. Other media decreased their share in the media mix. TV and outdoor lost a lot, with 2 percentage points and 1.7 percentage points respectively.

“The value of the advertising market in Poland after three quarters of 2020 amounted to nearly PLN 6.1 billion, which means a decrease of 11.7% compared to the same period of 2019. The weakest months in terms of dynamics were April and May – drops of more than 30% are the effect of the lockdown and crisis caused by COVID-19. Q3 brought an improvement of the situation and a reduction of budgets by only 2.5%, or PLN 52.4 million.

After nine months of this year, all media except for the Internet recorded declines. Online advertising generated a budget increased by 2.5%. Television and radio lost 15.5% and 11.8% respectively, while dailies and magazines lost 30.3% and 37.5%. Cinemas recorded the strongest negative growth – advertising spending was 70.1% lower than in the previous year as a result of the government’s decision to temporarily suspend cinema operations. In terms of sectors, thirteen of them reduced their advertising investments and only three intensified. Advertising spending increased in the largest sector, meaning trade – by 2.5% in the two smallest sectors: computers and audio/video (+12.5%) and home products (+14.4%). The largest volume drops were generated by three sectors: finance, food and automotive.

In June, the economic situation gradually began to recover. The advertising market also recovered after a difficult Q2. Advertisers learned how to communicate in times of pandemic, and the value of advertising investments was almost the same as last year. The drop of 2.5% should be considered a positive result. We assume that Q4 will bring further improvement in advertising activity, despite the partial lockdown introduced in November. Such a situation allows us to maintain the previous forecast for the advertising market and even slightly improve it. We estimate that in the whole of 2020 advertising budgets will be reduced by over PLN 845 million in total, thus the value of the advertising market in Poland will fall by 8.6%.

This year the Internet is the only medium that has resisted the crisis. The pandemic accelerated the development of the Internet, forced us to transfer many activities to the online world, and thus intensified the trend of flow of advertising budgets to this medium. Eventually, the online world will grow (+4.3%) as the only medium for the whole year and will definitely strengthen its position in the media mix.

TV advertising experienced a real market collapse in Q2 (-35.4%). Q3 quarter was decidedly much better, with a decline of only 2.2%. The demand for advertising was high, but the growth was lacking in viewership and thus in advertising resources. We forecast that Q4 will be good, with TV advertising spending falling by about 10% throughout the year.

After the Internet, radio is the medium that does best in times of a pandemic. After nine months of 2020, radio advertising spending has fallen strongly, by 11.8%, but it is still the least of all the offline media. After a very weak April and May, in Q3, the radio advertising market recorded only a 2.5% decline, which allows us to look to the future with some optimism and assume that in the last quarter there will be no repeat of the situation in the spring, and at the end of the year, the market will be able to compensate for the decline to 9.5%.

After three quarters of this year, advertising revenues of outdoor operators decreased by 38.4%. In Q3, the reduction of budgets contributed 26%, in Q4, the decreases may reach 30% and then all of 2020 will end with a 36% drop for outdoor advertising.

The pandemic accelerated the trend of the outflow of advertising budgets from the press to the Internet. We estimate that the whole year will end with a 31% drop for newspapers and almost 40% for magazines. Of course, cinemas are in the most difficult situation, and we estimate that this medium will see an 80% drop in spending on this year.

The year 2021 is ahead of us. Let’s hope that the covid situation will slowly start to normalize and we will not have to deal with a third wave of the pandemic. At the moment, we estimate that next year advertising expenses will be growing and will reach a 4.5% dynamic of the annual growth rate. Of course, the faster we deal with the pandemic, the greater the chance for a higher market rebound.”