Publicis Groupe: Online and Outdoor Advertising Drove the Advertising Market through 3 Quarters of 2022 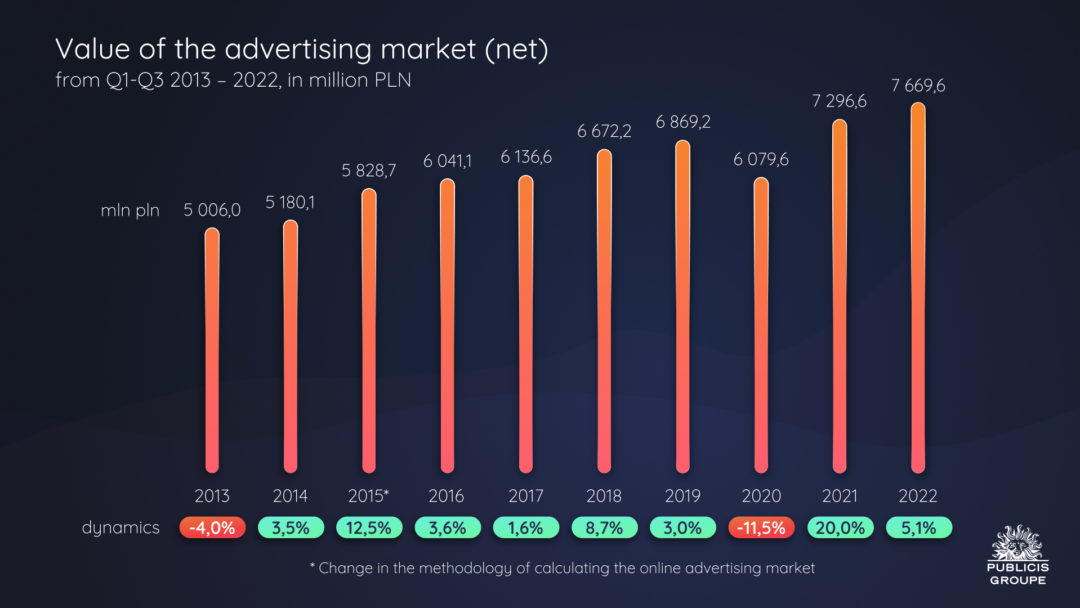 The advertising market grew by 5.1% after three quarters of 2022 to nearly PLN 7.7 billion, driven by a nearly 34.3% increase in outdoor advertising spending and a 7.9% increase in online advertising, according to the latest Advertising Market Report, published by Publicis Groupe Poland.

Chart 1. Net value of the advertising market after three quarters in the years 2013 to 2022

The advertising market in Poland increased in value by 5.1% after three quarters of 2022 compared to the same period of 2021. This means the level of advertising budgets exceeded those of the nine months of 2019 by almost 11.7%. Eleven sectors increased advertising budgets, while five reduced them. The largest increase in spending volume was generated by the commerce sector – retail companies allocated more than PLN 136.4 million more to advertising, which is 9.2% more than after three quarters of 2021. In particular, increases in advertising investments by companies such as Leroy Merlin, Castorama and Aldi stood out. Second place, in terms of spending volume, was held the pharmaceutical sector, which increased its advertising investments by more than PLN 92.0 million in the analyzed period (dynamics of 13.2%). Third place was taken by the other sector, whose budgets increased by 2%, i.e. by almost PLN 13.1 million, mainly due to the advertising activity of the following categories: building materials, business services, real estate. On the other hand, the largest decrease in the volume of expenditures took place in the food sector – food producers allocated less on advertising by PLN 142.0 million (dynamics of -19.4%). Attention was drawn to reductions in the budgets of companies such as Ferrero Poland, Nestle Poland, as well as Storck.

Chart 3. Changes in the value of advertising in the media classes between 2021 and 2022

After three quarters of 2022, the value of online advertising budgets (not including ad spending) amounted to more than PLN 3.4 billion, an increase of 7.9% compared to the three quarters of 2021. The Internet’s share of the advertising market also increased from 42.9% to 45.5%. Last year, after three quarters, the Internet was ahead of TV by just 0.9 percentage points.  Currently, that difference is nearly 5 percentage points. Video advertising grew the fastest – by 16.2%, search engines grew slightly slower – by 11.9%, while display advertising saw a slowdown in growth rate to 3.7%. Other forms of advertising recorded a decline of -25.8%. Q3 2022 was the second consecutive declining quarter at Meta. After Q2 2022, Meta Inc. reported a 1.5% decline in global revenues, Q3 brought further revenue reductions of -3.7%. In Europe, Meta’s revenue recorded its third consecutive declining quarter. Revenues declined by 16.3% year-on-year between July and September 2022. Such a bad result is undoubtedly influenced by the war in Ukraine, the cancellation of services in Russia, as well as the growth of TikTok, which is taking a large share of Facebook’s budgets. Alphabet, the owner of Google also felt the economic downturn, with Google reporting a 2.5% increase in advertising revenue globally in Q3, including 4.3% from search advertising (SEM & other), a slower growth than in Q3 2020 when the coronavirus pandemic was underway around the world. At the same time, YouTube reported a 1.9% decline in revenue for the first time in its reporting history.

Chart 5. Share of each advertising category in digital ad spending in the first half of 2022

Publicis Groupe analysts, after three quarters of 2022, estimated the size of the TV advertising market at PLN 3,050.6 million. This was 1.5% less than in the same period of 2021. The leader of the TV advertising market spending is the pharmaceutical products and medicines sector, whose investments increased by more than PLN 70.6 million (dynamics of 14.5%).  The commerce sector took second place, the advertising budgets of which were reduced by nearly PLN 15.3 million (dynamics of -2.8%). The food sector took third place, also with a decrease, by 17.6% (down by nearly PLN 85.4 million).

Radio advertising revenues totalled nearly PLN 530 million after three quarters of 2022, up 3% from the same period in 2021. The largest increase in spending volume was recorded in the case of the commerce sector radio market leader – by nearly PLN 25.8 million (up 12.1%). During the period in question, the most severe drop in radio revenues was in the budgets of the automotive sector. Automotive companies reduced spending by more than PLN 14.7 million (dynamics of nearly -30%).

Spending on outdoor advertising increased by 34.3% in the period under review (up by PLN 101.7 million) After three quarters of 2022, the revenues of the traditional media segment were higher by 27% (by nearly PLN 63.9 million in volume). The largest volumetric increase in spending was recorded for the telecommunications sector – by PLN 11.6 million (dynamics of 66.3%).

According to Publicis Groupe analysts, after nine months of 2022, advertising spending in magazines decreased by 2.7% and was PLN 3.3 million lower than after three quarters of 2021. The leader in spending was the commerce sector, which increased advertising investments by more than PLN 2.3 million (12.5% growth rate).

Advertising spending in dailies increased by 6.8%. The sector with the highest growth volume was the leisure sector (more by PLN 3.6 million, dynamics of 68.9%).

After three quarters of 2022, net advertising revenues in cinemas were estimated at nearly PLN 74.7 million. The value achieved after three quarters of 2022 is nearly 25% lower than the same period of 2019. All sectors increased their spending on cinema advertising. The top five sectors with the largest share of cinema advertising spending were media, finance, food, beverages and spirits, and travel and tourism, hotels and restaurants.

As a consequence of the varying dynamics of change of the various media classes, their market share is also changing. In 2021, the Internet overtook television taking the first place in the media mix. We are now seeing a strengthening of this trend, with it being clear that television has lost share not only to the Internet, but also to outdoor advertising. Cinema is also slowly rebuilding its position, with its share rising from 0.3% to 0.9%. The share of digital advertising increased by 1.1 percentage points to 44.5%, while outdoor advertising increased from 4.1% to 5.2%. Television lost a share of 2.7%, while radio’s share declined from 7.0% to 6.9%. Daily newspapers maintained their current position, while magazines lost from 1.7 to 1.5%.

“For the past three quarters, we have all been operating in a very uncertain and turbulent environment. Russia’s war with Ukraine, which has been going on for 10 months, has caused a humanitarian and economic crisis in our region, which the whole world is now facing, and its effects reach far beyond our region. This is also being felt in the advertising market, but contrary to our fears in the previous edition, the market has not put on the brakes, only slowed down. After growing 6.8% in Q1 2022, Q2 saw growth slow to 4.5%, while growth in Q3 slowed to 3.8%. This gives a market growth rate of 5.1% after three quarters. The latest November NBP projection forecasts GDP growth of 4.6% in 2022. The concern, however, is double-digit inflation, in the NBP’s forecast, at 14.5% for all of 2022.
The phenomenon of rising prices is also no stranger to the advertising market.

Between January and September 2022, increases were recorded by all media except television and magazines. Spending on outdoor advertising grew in double digits and by as much as 34.3%, which finally reached a higher value after three quarters than before the pandemic. Online advertising generated a budget of more than PLN 3.4 billion and achieved a growth rate of 7.9%. The Internet’s share of the advertising market was nearly 45%. The value of online advertising was higher than that of TV advertising by more than PLN 360 million. Investment in TV advertising fell by 1.5% and amounted to nearly PLN 3.1 billion, thus TV’s share of the advertising market fell from 42.4% last year to 39.8% in the period under review. Radio advertising recorded a 3% increase in advertising revenues after three quarters. Dailies gained 6.8% after nine months of 2022, while magazines lost 2.7% in revenue, and we estimate the size of the cinema market at over PLN 74.7 million.

Eleven sectors increased advertising spending and five reduced. The largest increase in spending volume was generated by the commerce sector – retail companies allocated more than PLN 136.4 million more to advertising, which is 9.2% more than after three quarters of 2021. This is also the sector with the largest share of the advertising market, and the level of its advertising expenditures largely determines the further development of this market. In contrast, the largest decrease in the volume of spending took place in the food sector – food manufacturers allocated PLN 142.0 million less to advertising (dynamics of -19.4%). Similar dynamics were recorded for the automotive sector, which reduced advertising investments by nearly PLN 95 million.
These are two sectors that have a negative impact on the advertising market, and the outlook for 2023 does not look favorable.

In the media, the word crisis and recession are increasingly being used across the board.
This cannot be said of the advertising market for the time being. After a growth of 3.8% in Q3, we are inclined to raise the annual forecast to 4.4%. At the same time, due to the highly uncertain economic environment, we maintain our forecast of 2.4% market growth in 2023.”