TikTok. Behind the phenomenon of “365 days”; or on the power of TikTok once again

A dozen or so days ago, the native media circulated an electrifying, but also somewhat embarrassing message. The film “365 days” directed by Barbara Białowas and Tomasz Mandes based on the best-selling novel by Blanka Lipińska under the same title turned out to be a massive hit of the Netflix platform. Production took first place in the weekly popularity rankings on markets such as the USA, Germany, Lithuania, Switzerland, the Netherlands (ups! Netherlands), Belgium, Turkey, Sweden, Austria, Czech Republic, Greece, Romania, South Africa, Portugal, India, UAE, United Britain, Mauritius, Canada or Israel. And all this even though the reviews are unfavourable, to put it mildly; on the popular site “Rotten Tomatoes” this film received a rating of 32%, and some reviews are quite amusing:

There are many explanations for the movie’s undisputable success. First of all, massive popularity is an effect of “social distancing” and being bored to death. Secondly, the fact that Netflix does not have many productions that exude eroticism, so it was relatively easy to saturate this (pun intended) “unsatisfied” demand. Thirdly, the male lead played by Michelle Morone’s with, for some at least, disturbing magnetism. Somewhere at the back of the mainstream discussion, however, information that was crucial for decoding the source of popularity appeared. Well, on TikToku itself, hashtags “365 days” reached millions and counting, with platform’s users sharing their reactions to spicy scenes from the movie. I must admit that some are quite fun and inspirational. Feel free to visit at your own risk: : https://www.tiktok.com/tag/365days?lang=pl

Given that the Netflix view counting algorithm includes two-minute sessions among them, it appears that TikToker’s fun has completely unknowingly contributed to the considerable business confusion and relatively niche production becoming the # 1 hit in 20 countries around the world. It illustrates this channel potential better than any statistics on the growing coverage or time spent in the application. 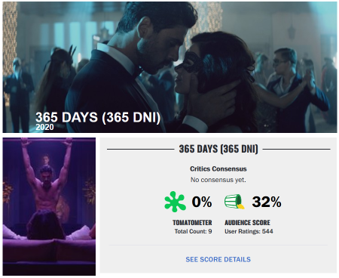