The clash of two giants 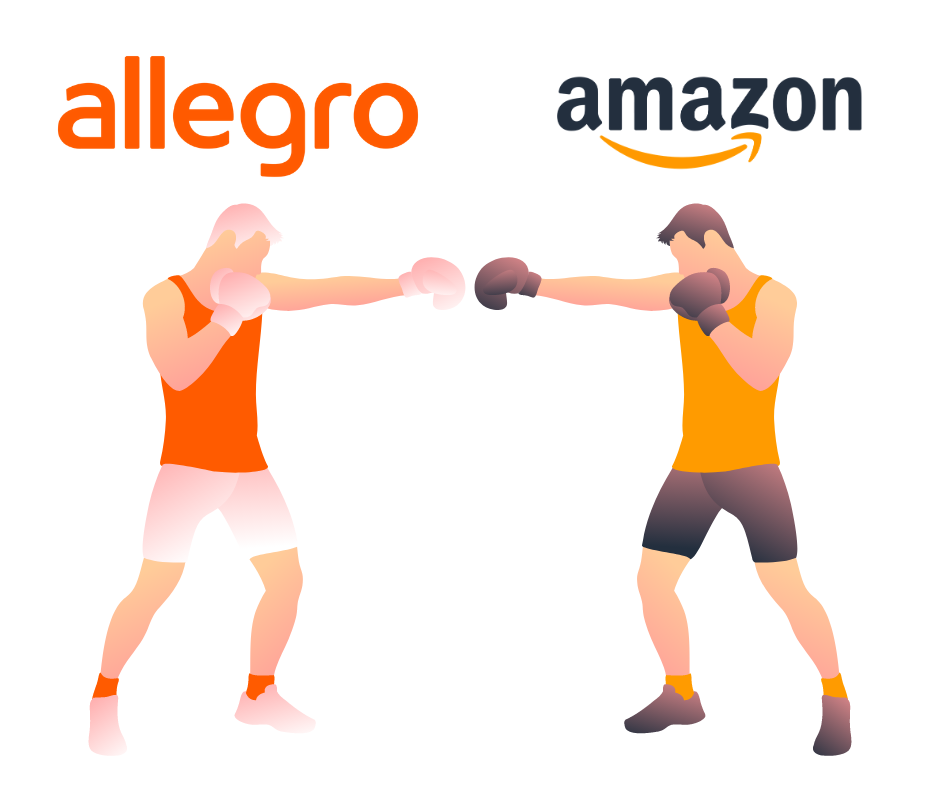 Although the first quarter of 2021 is only just behind us, it can already be said that it could be a breakthrough year in the Polish e-commerce sector. After the listing of the Polish Allegro on the stock exchange and the arrival of the first parcel lockers in Poland from the Asian AliExpress, it’s time for an attempt to conquer Polish consumers by the American marketplace, e-commerce giant Amazon.

From a virtual bookstore to a global e-commerce leader

Cadabra – that was the name of an inconspicuous online book shipping startup founded in 1994 by Jeff Bezos. But the site’s fortunes took a much different, galloping turn. Just a year later, the rebranded store, Amazon, sold its first title, and moments after that, it found itself on Yahoo’s list of recommended websites. The impact of this publication and the publicity it brought to the small business was an avalanche of orders such that by the end of 1995, the virtual bookstore was boasting 100 orders per hour.

Bezos’s company was growing at lightening speed. By 1999, Amazon had a staff of 500 employees dedicated solely to customer service. Investments were made in platform development and logistics, and finally, on the wave of success and a steady increase in interest, the company expanded its product line with new products. This move was crucial and the right one. Amazon had what consumers like best…meaning everything. The range of merchandise from the original books expanded to include movie and music CDs, electronics, home goods, apparel, cute trinkets, and even proprietary products (e.g. Kindle, Alexa). In addition to selling directly through Amazon, the site includes many smaller merchants who offer their products on the platform. As a result, smaller companies have gained access to millions of customers and Amazon gained a more extensive product range. The wide range of products has captured the hearts of Americans, building even more power and advantage in the market, which has given Amazon the chance to expand worldwide. In addition, localization mechanisms, fast delivery, entering new areas of business (entertainment), made Amazon occupy such a position on the market, not another.

Over the years, Amazon has consistently expanded the territory of its operations. Currently, the corporation’s branches are located, among others, in Canada, Great Britain, Germany, France, Spain and Italy. The company has been present in Poland with its logistics centers since 2014. To meet the demand for services of customers from Europe and using a good infrastructure, Amazon has built ten logistics centers, Amazon Web Services office (cloud service of the corporation) and Technology Development Center in Poland, thus contributing to the employment of more than 18,000 of our fellow citizens. Amazon also offers, among others, trainings for merchants willing to start selling on the biggest Internet platform in the world. Such good preparation and know-how in conducting operations in other countries was only a prelude to the inevitable – the launch of Amazon platform in the Polish domain.

On March 2, 2021, after years of waiting, the Polish version of the store became a reality. In addition to the retailer opening up to more than 200 countries, allowing it to reach 300 million customers worldwide, Amazon provides many enticing opportunities for users. Internet users can enjoy an easy 30-day free returns on ordered items and no-cost courier delivery for orders over PLN 100. It is also possible to pay for products via BLIK or other online payments. But does “our” platform have anything to fear?

Apart from the extended return policy, Amazon is not able to shock Polish users. Everything that the corporation offers has been offered for years by Allegro. What is more, most of the possibilities are much more limited compared to its Polish counterpart. Allegro’s greatest strength is the SMART service, where for only PLN 49 per year, users can take advantage of free shipping to parcel lockers for purchases of a minimum of PLN 40. This option has revolutionized online shopping, because the cost of delivery used to be a barrier to purchase and the additional fee for shipping ceased to be such a discouraging element of the purchase decision.

Payments in the Polish marketplace are also hassle-free and varied. Almost any payment solution is available, plus Allegro tempts with many interest-free installments or the proprietary Allegro Pay, which allows you to split payments and adjust the pace of repayment to your financial liquidity – something that Amazon definitely lacks. One Round for the Pole.

Something you can’t deny Amazon is certainly taking care of merchants, who make up a significant percentage of the listings on their website. In addition to the aforementioned numerous training sessions, Amazon has created a logistics service designed for companies selling on the marketplace. FBA (Fullfillment by Amazon), involves warehousing goods sent in advance by the merchant. When a product is ordered, one of Amazon’s warehouses will pack and ship the package as quickly as possible. In this way, thanks to the ever expanding network of logistics centers, the American company ensures express shipping to the addressee and relieves the seller of the storage and distribution of packages. What is more, it is not only the merchant who benefits. The buyer, in addition to an express and high quality service, gains the ability to combine multiple products in one shipment sold in the FBA model. Definitely points for Amazon.

Another round in this duel is the commission incurred by sellers – and here it is necessary to point out the defeat the global corporation. The minimum amount, except for a few categories, is PLN 1, where on the other hand on Allegro in all categories it is PLN 0.25. The situation is similar with the transport costs and dependence on the weight of the package. Here, the American corporation makes the shipping price dependent on as many as 45 weight thresholds, where the Polish website has definitely simplified it to a few thresholds and the SMART offer.

And since we are on the topic of SMART…. We have already said that Allegro constantly tempts with its offer, but it should also be remembered that in addition to buyers, sellers also benefit from it. Currently the cost for this service is PLN 49 when paying for 12 months or PLN 10.99 when paying for 1 month – which gives endless free shipping on purchases over PLN 40. Admittedly, we do not yet know the Polish prices of the equivalent of Smart (Amazon Prime), which currently presents itself abroad as being much more expensive. However, if Amazon combines delivery with its flagship Amazon Video, as it does in other countries, such a subscription can become incredibly tempting. This round is inconclusive.

Amazon isn’t as scary as they paint it

Amazon’s assumptions are beautiful – globalization, own offer, goods from all over the world, attractive prices… but probably everyone can admit that Amazon has disappointed us to some extent and everyone imagined the launch of the Polish domain differently.

During the first days the website was full of bugs and its operation left a lot to be desired. The interface was an eyesore and the lack of intuitiveness did not go unnoticed.I tried to find something on Amazon. Zilch. This was a right pain in the a….I went back to Allegro breathing a loud sigh of relief, with its friendly filters and normal interface. Maybe Americans are used to this chaos. Since I have a choice I will choose Allegro. All is good, but whey does Amazon’s website look like Web 1.0 from 2005? You can’t use this.

Being used to the current standards and looking at the product inventory of Allegro or AliExpress, we can also say that the store’s offer is lacking, and the prices are not as bargain as we all imagined. Product descriptions (at the time of writing) were inconsistent, often chaotic, as if translated by an online translator. Positioning in search results, both for products and platform information (shipping, payment information), is non-existent. Moreover, due to the lack of marketing communication, many people still live in the belief that Amazon will appear only in the near future, not knowing that it has already appeared on the Polish market.

The American e-commerce leader did not provide any trailer for Internet users, neither on the Internet nor on television. The news about the launch of the platform was only in the industry news or on technology websites, and just after the launch a small group of people could catch the programmatic ads, encouraging them to download the shopping application. Competitors, on the other hand, are not passively standing by… A few weeks ago AliExpress prominently promoted its birthday and encouraged people to take part in the discounts offered, while Allegro pops up every now and then on the homepages of major media providers, reminding about promotional offers or Allegro SMART. What is more, the Polish platform is not resting on its laurels and by introducing new products or services (e.g. Smart Student) is making its offer more and more attractive and is ready to fight as equals for the Polish customer.

In short, the Polish premiere of Amazon can hardly be called a premiere with a capital P, rather it can be described as an unnoticed, quiet entry of the tycoon. So there’s no denying that at this point Allegro is much stronger in its territory and the first battle is definitely won on points.