Telemetry. Who has gained, who has lost, i.e. the impact of increasing Nielsen panel on TV channel results’ shift

Nielsen aims to increase the panel to 3,500 households, and the date of the panel’s completion depends on the pandemic – because of it, the recruitment process for the survey was discontinued.
Let’s try to make some initial conclusions and observations, after the first two weeks, still checking whether the reality aligns with predictions, or have the “big” lost and the “small” gained? How did the channels’ viewership change? Who has won and who has suffered compared to the smaller sample? And finally, how does the “condition” of the medium change?

First of all, suspicions that the enlarged panel will “pick up” shares in large stations are confirmed by the results. The whole “big four” lost their shares jointly and severally – in the commercial group 16-49 TVP2 recorded the biggest regress, and the smallest TVP1. The “subjects” gained for this, but at the moment the larger ones, such as Polsat News or TTV. In the analysis, we took into account only those channels with a 1% market share: 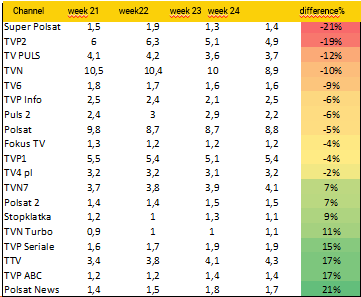 As we look at all television channels in telemetry (and there are over 120), we see that so far more stations have benefited from the change. At the same time, the profit in the form of increased audience share is relatively large, because it exceeds 50% of the results recorded in the weeks preceding the change. This confirms that “viewership” has changed from large to smaller channels, adding weight to their position. However, it is noteworthy that for nearly 1/3 of the market, the new panel does not mean significant changes in their results:

When analyzing this data, keep in mind that we are comparing the second half of May with the weeks when a long weekend occurred. Nonetheless, it seems that the changes are caused mainly by the panel, and to a lesser extent by the seasonality of the TV market.