Singles Day – the world’s largest shopping feast, which few have heard of 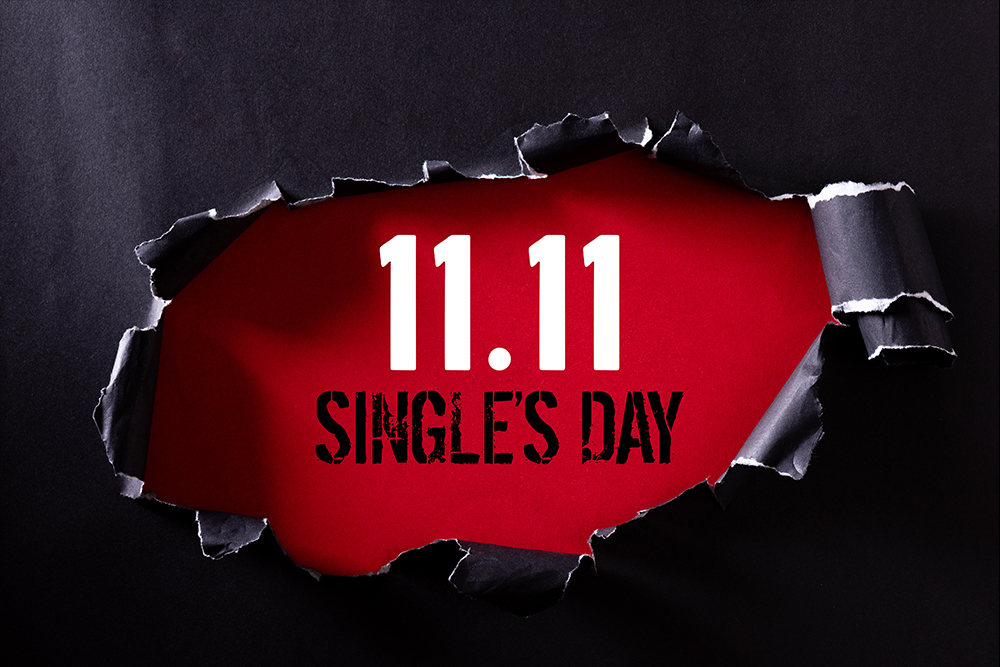 The end of November is the beginning of the Christmas shopping season. It starts with Black Friday, which has ceased to be an event known some time ago only on the American market. A moment later we have Cyber Monday, December 10 Free Shipping Day and then “normal” Christmas shopping. This period is often called “shopping holidays”. Meanwhile, the biggest global event in this category has been the Chinese Singles’ Day for several years now, on November 11. The main organizer and player of this day is the Alibaba group and its platforms Taobao and Tmall.

This year’s sales in these two locations amounted to USD 74 billion.

For comparison, in 2019 the total online sales (in the US) during Thanksgiving, Black Friday, Small Business Saturday and Cyber Monday amounted to USD 24.2 billion. The result of the Chinese ecommerce giant this year is over 80% higher than the year before.

Where did Singles Day come from in the first place?

In the early 1990’s, several students at Nanjing University were wondering how they could cope with the boredom and discomfort of not having a partner. They decided that 11/11 would be the day when they would celebrate the bachelor lifestyle without commitments. Initially, it was indeed called Bachelor’s Day, but after the news spread and the idea of celebrating was gaining a larger group of supporters and advocates, November 11 was renamed Singles Day (it is also called Double 11 – Double 11). For a long time it was an anti-Valentine’s Day, during which single people bought themselves presents and although dating parties were organized, the main goal was to resist the pressure of merging into couples. Year after year, Singles’ Day became more and more popular until finally Alibaba took an interest in the occasion, and in 2009 organized the first shopping holiday on 11.11. Taobao and Tmall (then still known as Taobao Mall) offered discounts of at least 50% and free domestic delivery.

In the first year, 27 brands participated in the event with sales of USD 7 million. Let’s fast forward 11 years, in 2020 sales increased to USD 74 billion and the number of participants to 250,000. This year, Jack Ma extended the shopping day to two periods – November 1-3 and November 11 – to facilitate participation by smaller brands. The scale of logistics that was involved in servicing such large sales is also impressive.

Cainiao, Alibaba’s logistics arm, had 3 million employees and almost 4,000 planes and ships to handle and deliver 2.32 billion orders within 11 days.

Singles Day is no longer just an Alibaba event, it is joined by many other ecommerce platforms, with the giants JD.com and Pinduoduo leading the way. It also ceased to be a celebration exclusively for Chinese brands and consisting only of offering the highest possible discounts. For several years now it has been a huge logistic, commercial, but also entertainment undertaking.  The day before the main event Alibaba organizes concerts of the biggest stars. In previous years, Mariah Carey and Taylor Swift performed, this year the participants could watch a virtual concert of Katy Perry, Chinese pop star Jackson Yee and renowned pianist Lang Lang.

Brands (local and foreign) use Singles Day to introduce new products, limited collections available only at that time or available in China earlier than in the rest of the world. The move away from discounts as the main sales force has encouraged luxury brands to get involved. This year, about 200 (twice as many as in 2019) of them took part in the commercial celebration, including Cartier, Balenciaga, Chloé and Prada for the first time. Dior prepared a special collection, which was available from mid-October on the brand’s website and in the store on the WeChat platform.

Singles Day is also a celebration of technology and using it to sell and build an experience for consumers.

For several years the star of this event has been live-streaming, during which commercial celebrities offer a range of products. It is worth noting at this point that the offer and promotion concerns not only cosmetics, clothes or electronic products, but also furniture, cars or real estate. Alibaba has announced that 300 celebrities and 400 company managers will run on its live-streaming platforms. JD.com also promised 300 celebrities, the employees were supposed to be 500. During the pre-sales session at the end of October, the two most popular commercial celebrities led their show. Li Jiaqi presented 126 products in 7 hours, his competitor Viya Huang showed 149 products at the same time. A total of 300 million people watched them and the total sales they generated exceeded USD 150 million.

This year, Alibaba also boasted of the extensive use of artificial intelligence to build an experience for consumers who were involved in the shopping frenzy. In addition to celebrities, the live-streams were also conducted by virtual assistants who, thanks to AI, were able to respond to inquiries or adjust communication to the mood and engagement of users. The algorithms also enabled the translation of streams into English, Russian, Spanish and French, which took place on the international AliExpress platform.

More and more brands from all over the world are taking part in Singles Day, but is there a chance that this event will spread to other areas of the globe as it did with Black Friday, for example?

For the time being, despite the growing scale and fame year after year, 11/11 is known mainly in China and among Chinese communities in various countries. According to YouGov data from October this year, only 2% of British consumers were aware of this event and planned to participate in it. The situation in the United States is very similar – according to Deloitte, 3% of American consumers were planning to shop during Singles Day. American lifestyle service Refinery29 described 11/11 as “the world’s largest shopping event you have ever heard of”. In some Western countries there are special offers and promotions, but not on a large scale. The small time distance from Black Friday (about two weeks) may make it difficult to encourage consumers to shop during this new (and foreign) opportunity. So far, the rest of the Western world has imported ideas from the United States and there the date of November 11 is already occupied by Veteran’s Day, which is celebrated in a dignified manner. In Poland we have Independence Day, which will also be difficult to “overshadow” with a shopping event.

It remains for us to observe the solutions, technologies and innovations used in China, to be inspired by them and try to use some of them for our brands.