Does responsible and sustainable development mean giving up profits? 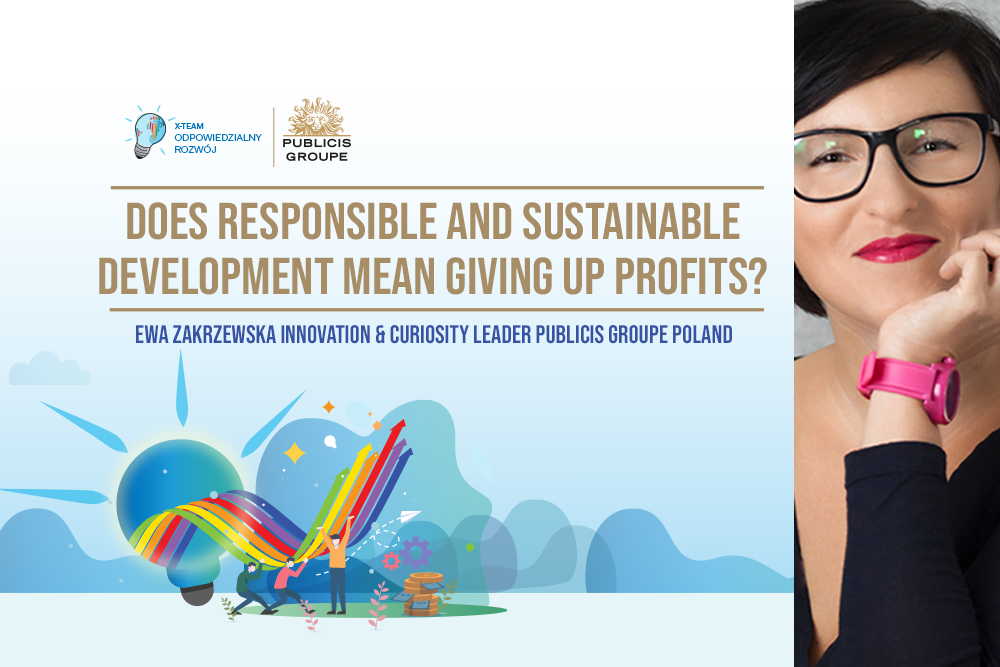 The concept of “sustainable development” entered the public space for good in 2015 when the United Nations announced 17 goals to build a better future for all. The Agenda for Sustainable Development was developed by 193 countries and all of them have committed to its implementation. The goals presuppose the coherence of three key elements: economic growth, social inclusion and environmental protection. The UN emphasizes that all of these components are interconnected and all are important to achieving the well-being of individuals and entire societies. And this is where the key to the answer to the title question lies – business development, i.e. generating profits, has to be consistent with improving the situation of people and taking care of the environment.

During this year’s Web Summit, sustainable development was one of the main topics of both the lectures and discussions, as well as offers from startups and entrepreneurs present in Lisbon. One of the most interesting voices in this area was Luc Speisser, Global Chief Innovation Officer at Landor & Fitch, who warned companies against running away from the money conversation. He cited the UN’s definition of the 3Ps – People, Planet, Profit. He emphasized that neglecting any of these elements precludes sustainable operations. Speisser called on companies to stop wasting resources on nice words and campaigns that do not change much both in the world and in the position of the brand itself. It’s not advertising efforts that are supposed to promote sustainability. Entire companies and brands are to be built in a responsible way, with attention to each of the 3Ps. But what might that actually look like?

The answer to this question can be Veja, a sneaker brand, which was talked about during the Web Summit by one of its founders – Sebastien Kopp. The company was founded in 2004, the second founder was François-Ghislain Morillion. Two young (25 years old at the time) Frenchmen decided to use their (realized) privileged position (good education, family support) to try to change the world for the better. They decided to start a sneaker brand. Kopp admitted that at the time they had no knowledge of the subject. Their only assumption and goal was to produce something that would be good for the environment and be socially and economically just. Creating Veja turned out to be not only learning the business, but also charting new ways of doing it. They chose Brazil as their manufacturing location because not only does it have the raw materials needed to make the shoes, but it also cares about worker rights and treating workers well. They found suppliers of organic cotton – no pesticides are used in its cultivation and the crop enriches the land instead of depleting it. The rubber, which is the other essential component of the shoes, is harvested by a community living in the Amazon in a way that does not destroy the forest stand. Kopp and Morillion signed multi-year contracts with all the suppliers, with a fixed price so their partners could be sure of earnings in the long term. The price itself was, as Kopp put it, at a “fair level,” i.e. dozens of percent above the market price. The logistics of the shoes are handled by the French organization Ateliers Sans Frontières (Integration Workplace), which helps disadvantaged people regain their dignity and return to society. The production carried out in this way costs 5 to 7 times more than the standard. So how is the brand able to sell shoes at a price that is affordable to the masses? They did away with paid advertising believing that information about their product would spread organically.

The whole story of how the Veja brand was created and developed sounded like a case of a small company with little chance of success. And right in that last word is the clue to understanding sustainability – what is our definition of success. Throughout its existence, Veja has sold 3.5 million pairs of shoes. That’s a fraction of what well-known global players sell. However, this is not a result of a lack of demand for the brand’s sneakers, but a conscious control of production growth. Kopp explained that they are significantly limiting orders from large retail chains because fulfilling them could mean worsening conditions in the Brazilian factory or sacrificing high standards of care for raw materials. Controlling growth instead of growth at all costs. Veja’s sustainable and responsible approach to business can be seen at every turn. There is providing decent living conditions for employees, building an inclusive environment, and improving the livelihood of local communities. There is such a thing as truly organic farming and sourcing raw materials in a way that does not damage the environment. And finally, there is profit and development, which is created in a way that does not disturb the elements mentioned before. The talk with Sebastien Kopp and the story of Veja was probably one of the few that received a long standing ovation from the conference audience.

Veja was created from the very beginning as a sustainable brand so its positioning and testimony are definitely different from what we see in organizations whose foundations and way of working (for various reasons) were different. In recent years, we are seeing more and more companies taking up the challenges set by the UN. This is also happening because companies like Veja are changing the standards, teaching consumers about new opportunities, and thus forcing entire industries to look at how to act more responsibly. Many corporations are investing heavily in research and development, innovations that will produce without harming the environment. Organizations are also caring more about people, finally recognizing that they are the source and creators of company success. What we need to remember is that (as a global community) we are at the beginning of this journey and there is a lot to do. This also means a huge opportunity for brands to find their own unique sense of existence to grow their business and responsibly create profit that will contribute to repairing the world and building a better future.